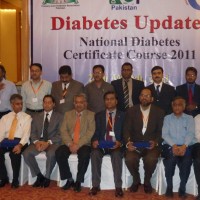 Primary Care Diabetes Association in collaboration with Diabetes Pakistan, Jinnah Allama Iqbal Institute of Diabetes & Endocrinology & Servier Research & Pharmaceuticals Lahore organized a National Diabetes Certificate Course 2011 on 20th March 2011 at a local hotel in Karachi. The aim of the National Diabetes Certificate Course 2011 is to update in the diagnosis, management and prevention of Diabetes for primary care diabetes physician.

Prof. Javed Akram, President, Diabetes Pakistan & Principal Allama Iqbal Medical College, Lahore in his address said that diabetes is playing hazards in our life. Diabetes Pakistan is working to bring all the stakeholders and people working in the field of diabetes to a platform to interact and share the innovations in the field of diabetes. He thanked Servier for supporting them in organizing this certificate course.

Speaking on his presentation “Diabetes Mellitus: Disease Overview and Underlying pathogenesis pathways , he informed that Diabetes mellitus is a group of metabolic diseases in which a person has high blood sugar, either because the body does not produce enough insulin or because cells do not respond to the insulin that is produced. It is major cause of premature mortality. 80 percent of diabetic patients die from vascular disease. As many as 92% people with type 2 diabetes have insulin resistant.

Diabetes is also called mother of disease because it brings many other disease with it. 90 percent of the peoples with Type 2 diabetes are obese. It is a preventable disease and we are trying everything to prevent the disease.

Dr. Najmul Islam, Consultant Physician of AKU briefly elaborated “Management of Diabetes: What is new”. He informed the audience that type 2 diabetes, a variety of diabetes that effects adults and grown ups, is effecting the children more often now and is a cause of great concern. This increasing prevalence of Type 2 diabetes in children is the result of lifestyle changes leading to obesity in this age group.

Management of the patient with type 2 diabetes requires a multidisciplinary team approach. In addition, the primary care provider must take a systematic approach to the evaluation and management of the patient. The goals of therapy are to correct the metabolic abnormalities of diabetes and to prevent the development of microvascular and macrovascular complications. Whether a new patient is being evaluated or an established patient is being followed-up, recognized treatment guidelines and recommendations for ensuring good diabetes care should be kept in mind.

Dr. Obaid Hashmi, Consultant Diabetologists & Scientific Coordinator, Primary Diabetes Care Association said that Pakistan is living in the diabetlognic environment. Diabetes mellitus is a chronic condition, but people with diabetes can lead a full life while keeping their diabetes under control. Lifestyle modification  is an essential component of any diabetes management plan.

Lifestyle modifications can be a very effective way to keep diabetes in control. Improved blood sugar control can slow the progression of long-term complications. Multiple small changes can lead to improvements in diabetes control, including a decreased need for medication.

Diabetes requires a lifelong management plan, and persons with diabetes have a central role in this plan. Lifestyle modifications are an opportunity for diabetics to take charge of their health. Therefore, it is important to learn as much as possible about diabetes and to take an active role in making decisions about healthcare and treatment.

National Diabetes Prevention Program (NDPP) Pakistan is a project which is a step wise and phase wise project and it has been designed under the IMAGE  (European Union Diabetes prevention project) & DE-PLAN (Diabetes in Europe, Prevention by life style, physical activity and nutrition ) guidelines.

Dr. M. A. Ebrahim, Consultant Physician & Diabetolgoist spoke on Diabetic Hypertension & Endothelial dysfunction. He informed that there is compelling evidence for endothelial dysfunction in both type 1 and type 2 diabetics. This dysfunction is manifest as blunting of the biologic effect of a potent endothelium-derived vasodilator, nitric oxide, and increased production of vasoconstrictors such as angiotensin II, ET-1, and cyclooxygenase and lipoxygenase products of arachidonic acid metabolism.

These agents and other cytokines and growth factors whose production they stimulate cause acute increases in vascular tone, resulting in increases in blood pressure, and vascular and cardiac remodeling that contributes to the microvascular, macrovascular, and renal complications in diabetes. Reactive oxygen species, overproduced in diabetics, serve as signaling molecules that mediate many of the cellular biochemical reactions that result in these deleterious effects.

Dr. Rehan Omar, Consultant Cardiologists talked about health tusami including Diabetes. He informed that Diabetes is the leading cause of related deaths. It is five times more prevalent in Pakistan.

The situation in Pakistan, as he mentioned is also getting worse and according to International Diabetes Federation, we have a diabetes prevalence of about 7.1% and it is estimated that if steps are not taken than Pakistan will become the 4th leading country in the world by 2030 in terms of having the number of people with diabetes.

Dr. Khurshid Khan Consultant Diabetologist  and endocrinologist from Jinnah hospital Lahore,  spoke on Diabetic nephropathy: from prevention to treatment. He informed that Diabetic nephropathy is a progressive kidney disease. It is more common in ESRD in United States. The exact cause of diabetic nephropathy is unknown, but it is believed that uncontrolled high blood sugar leads to the development of kidney damage, especially when high blood pressure is also present. In some cases, your genes or family history may also play a role.

Diabetic nephropathy generally goes along with other diabetes complications including high blood pressure, retinopathy and blood vessel changes. The goals of the treatment are to keep the kidney disease from getting worse and prevent complications. Controlling high blood pressure is the most effective way of slowing kidney damage from diabetic nephropathy.

All persons with diabetes should have a yearly checkup with their doctor to have their blood and urine tested for signs of possible kidney problems. Persons with kidney disease should avoid contrast dyes that contain iodine, if possible. These dyes are removed through the kidneys and can worsen kidney function.

It is also very important to control lipid levels, maintain a healthy weight, and engage in regular physical activity.

Dr. M. Tahir Chaudhry from Lahore informed that Diabetes is the leading cause of blindness and ESRD. Diabetes women are at high risk for CHD. Tight diabetic control reduces casdiovascular complication by 50%.